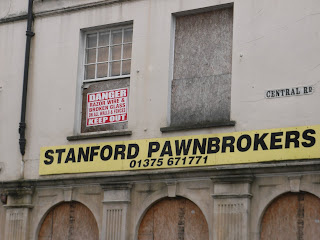 Saturday we cycled from Hackney to Horndon- on the hill near Stanford le hope c through the Olympic Park down the Greenway to Plaistow. then through horrible depressing bits of Essex along the Al3.

It makes Bntain look as if it were in a depression - except this is clearly not a recent effect.

Quite good bike lanes however-some shared with pedestrians which works because no one walks along these roads. Deserted of people. Run down, gloomy, depressing.

Then on to A1036 which is worst for cyclists as Cars drive along it at speed. But we made fast time. only getting lost once when bike Lane died at a horrible mall guarded by police because of a murder of a lad last night.

We stopped at the Albion Pub very Essex for late lunch. At m25 we turned off to Aveley and 0rsett where it thank. orsett is guile pretty -lovely Church, thatched Cottages-begins to get pretty. Horndon has a lovely centre with medieval market building and historic pubs. We are booked into the Bell Inn timber framed traditional pub with courtyard. Saturday night its rammed with people food is very good. there has to be some compensation for living in this part of Essex!

Still its nice to eat drink and not have to drive home. I'm thinking this can be a peasants revolt bike tour. 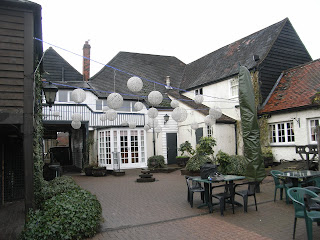 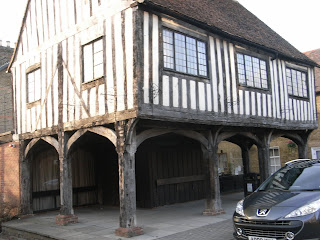 Unfortunately, Poppy has a puncture-slow one -so we abandon drive around Fobbing+ Coringham. We go to Stanford-le -hope to get the train home, but drive around the little town to take a photo of the peasants revolt town. It is not a lovely town but maybe the miserable weather makes it more godforsaken that it really is. Poppy gets another puncture so we get train home

I think this cycle ride can give a real warts and all ride through England. Could start in the City, Brick Lane, Whitechapel, Mile End, Bow, Stratford, Greenway, Dagenham, Orsett,Horndon,Stanford

Or start in Stanford-le-hope and do in Peasants Revolt Bike Ride to Mile End, Aldgate I City ending at Smithfield.
cycling guided walks history

stanford4god said…
I live in Stanford le Hope and am interested in your comments about how run down the area was...what specifically was it that made you feel this way, there has been a growing unrest amongst the engaged community via the local newspaper about the state of the place and this might add fuel to the fire.
1:30 pm