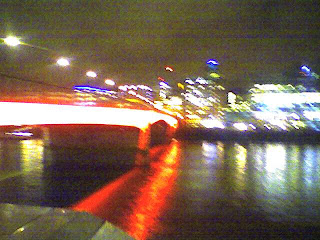 I'm going through smart phone misery. I used to love my old Palm Treo - it had an early touch screen, good keyboard and a myriad of what would now be called 'Apps' really great ones like a sketch programme you could draw on and overlay over photos - neat and fun. But also a marvelous calendar programme in which you could categorise tasks and which were colour coded.

It worked so well and the colour was the key to its success. It had a terrible camera which, created the most marvelous photographs at night because they were so heavily distorted. Take a look at these. I even read Middlemarch, and Don Quixote on it using an ebook reader, and had a little keyboard which made it perfectly practical to edit word documents.


But the Treo was a bit of a brick, and I took a gamble on buying a Nokia E71 thinking that as colour was so obviously essential for a calendar app it was bound to have such but it didnt and I could not love my new Nokia.

Then Palm announced the Pre which was said to be Iphone busting - I did not want to go to 02 so did not order one and was not sure the calendar was colour. But I saw an illustration which showed a colour calendar so I purchased a second hand Palm Pre from ebay and I can't tell you want problems I had getting it to work.

Firstly you needed a special device to override the locking and then the phone cost me an absolute fortune in connection charges when I played around with multiple google calendars which turned out to be the only way of getting colour on the calendar. Having got it all set up and after tearing my hair out doing this the phone then failed as soon as the software was updated automatically by the phone.

So after a lot of anguish I ordered O2 only to have them reject my credit. I was furious, and then had to spend ages rolling back to the old operating version on the pre.

Eventually i managed it. Two days later when changing batteries it updated to the new version without asking my permission.

i gave in returned to my Nokia E71 which I had, perversly come to realise was a really excellent telephone and txting machine(just not so good for internet and calendar) and eventually got 02 to accept my credit and swapped over to the Pre.

the pre is quite good but the battery is awful - does not even last a day, and the multi-touch is a bit tricky - does not always work first time and the screen is frankly a little small for the internet - so I'm currently thinking the iphone would have been better.

So, I had probably lost about 3 days work and thousands of grey hairs and shortened my life by a few days all in the name of a colour calendar.! The camera is good though, the calendar is colour and it is lighter than the iphone. I may grow to love it but so far very grudgingly. What I do like is that it imports pictures from face book of my contacts and it is really nice talking to my children and to poppy with a picture of them on the screen - makes me feel happy.
ict