Wolf Hall in London Walk - the City of Cromwell & More

January 10, 2016
The Walk went ok - I had too much information and not quite well digested enough so it damaged by normal Tudor walk without making it a great Cromwell Walk.  This often happens on first walks imho, and may also have been partly because the route was far away from their homes so we got right into the Dissolution before we had discovered who they were.  So this is the route as it should have been: 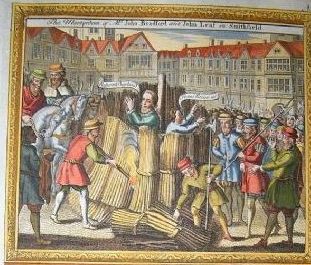 1. Tower Hill - imprisonment and executions  I read the final, reported, words of Cromwell and More in their executions which was 5 years apart.

3 Walk around the Walls to Bishopsgate

4. Austin Friars. Cromwell at home amongst the local inhabitants, many foreigners including Chapuys. hie was friends with the Prior who preached in favour of Anne Boleyn (the congregation walked out) and here, Robert Barnes was imprisoned during the time of Wolsey (see Wolsey did not have them burnt at the Stake unlike the saintlike Thomas More.)

5. The Barge - where Thomas More lived, and where Erasmus came and delighted in the 'Whole World of Osculation' that lay ahead of him.

10 Milk St - where More was born as noted by his father in a page of Geoffrey of Monmouth.

11. St Martin's Le Grande - where More confronted the Evil May Day rioters as they threatened to murder all foreigners.

12.  St Pauls - where the Bishop of London burnt the books of Martin Luther and William Tyndale - nothing less that the English translation of the bible.  Pointed out John Colet's school, and the Lollard's Tower, where a 'New man' was murdered by the inquisition.

13.  Stationers Hall - printing, registration of books and the plaque to Wyken de Worde who pirated 'Utopia'

20 Carterhouse - where Prior John Houghton's leg was nailed up after his execution.