February 23, 2016
I was disappointed.  To me,  it was a typical 'Essay Exhibition' The creators of the Exhibition  must have thought this is a good idea

Start with the Soul, Descartes  take that to Neuroscience. 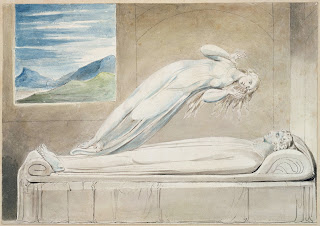 The art works did not communicate strongly and the text really did not give  a compelling discussion of consciousness. Intellectually, it seemed something I could have put together after looking at a Horizon programme or two, with a few book reviews and Radio 4 programmes.  You leave about as informed as you came in and not inspired.

What I took out was Descartes Dualism, Blake's illustration of the female soul leaving the male body. A brain scan that shows a clever way of communicating with brain damaged, but this was most certainly not an interesting exploration of consciousness.

In fact I think it is a failure as an Exhibition