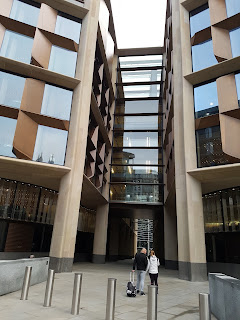 I walked around the new Bloomberg Building yesterday. I have contradictory thoughts. But what is clear is what an impact it has. Its huge, its restrained, elegant, perhaps timeless and brings out its neighbours. It places you face to face with great architecture by Wren, Koolhaas, Stirling, Lutyens, Dance and so on. It reinstates part of Watling Street. it creates a sense of space. So it many ways it is a magnificent achievement. And by far the best Foster building in the City for a very long time.
But and there are a few buts for me. 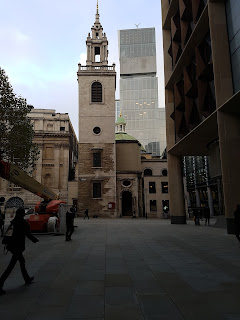 The public space it creates is not great. Yes, it does give it a sense of space around the building but there is no great new public square. just quite nice small spaces. The building lets down Cannon Street. The facade along Cannon Street could have helped make Cannon Street into a better retail street but it is given over to a services entry which is surely very wrong for Cannon Street. But mostly, it is yet another landmark in that great task that the City of London has embarked on - the destruction of the historic City. Yes you can see great pieces of historic landmarks but they sit as islands in a sea of modern architecture. They are isolated, it helps them become icons perhaps, Somehow Bloomberg marks a period, an end to the Victorian and early 20th Century City. It is gone, it is pickled in Bankers and Hedge Fund aspic. Mammon has won

This link described the project.