February 20, 2018
The obviously interesting aspect of this is that he is dark skinned. But the piece below indicates what I think is a major change in perception of our origins.  Early DNA studies suggested that most Britains were descended from peoples coming here after the ice melted c 14,0000 years ago.  It was suggested that 90% (in the west) and 75% (in the East)~ were descended from the Basque area refuge.
This threw doubt on the scale of Saxon migration and made the division of peoples on these islands into Celts and Britains a cultural not a genetic indentity.
However, this piece talks about  Cheddar man being part of the Western Hunter Gatherer Group and it then reports a recent  'study released last year also in preliminary form claimed that around 4500 years ago, the time Stonehenge was built, the then indigenous UK genome was all but displaced by migrants from the Continent who made Beaker-style pottery (see Pots on the March, Salon 388). The 10% of WHG DNA seen in modern white Britons could be derived from these Beaker people. They would have picked it up from intermixing with Neolithic Continental populations with a proportion of WHG in their genome.'
Thus - we - the British have been continously in these islands not for 14,000 years but 6,500 at most.  Big big changes. I for one am finding the contradictory results from DNA very confusing, and I feel  that the shaft of light that DNA seemed to throw on archaeology was a chimera. Am I right?

This is from Salon IFA 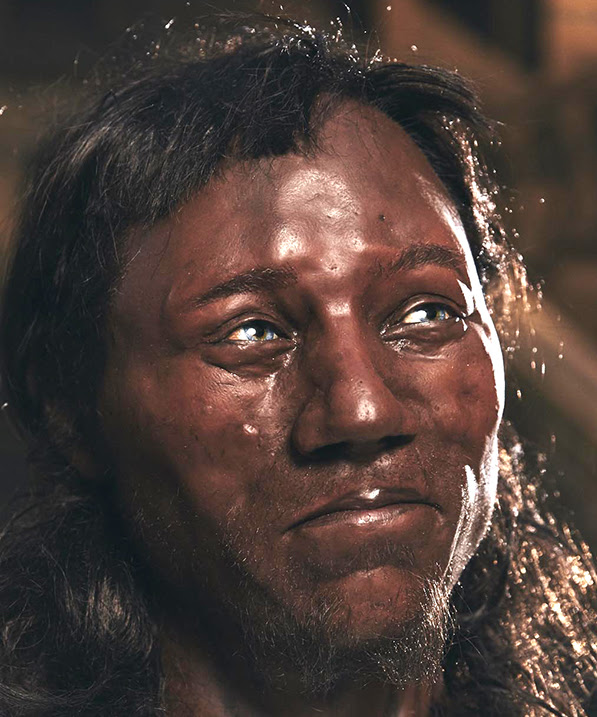 This is the face of Cheddar Man, a modern human buried in a cave near the Somerset village 10,000 years ago, as reconstructed by Dutch brothers Alfons and Adrie Kennis. The model comes from the most recent of a series of projects led by Chris Stringer FSA at the Natural History Museum, in which scientists have been analysing late glacial remains from Cheddar Gorge recovered since the 19th century, including some from new excavation. Cheddar Man, a very rare near complete skeleton of its age, was found in Gough’s Cave in 1903.

The shape of the head and facial details were determined by features of the skull, but skin (dark or dark to black), hair (dark brown possibly black) and eye colour (blue/green) were suggested by elements of the man’s DNA. His whole genome has been sequenced, from a small amount of bone taken from the skull. It was read by Ian Barnes and Selina Brace at the Natural History Museum (NHM), and analysed by Mark Thomas and Yoan Diekmann at UCL Genetics, Evolution and Environment.

This is the first time the colour of Cheddar Man’s skin has been shown to be dark. Public interest was strong, helped by promotion for a Channel 4 film broadcast on 18 February (First Brit: Secrets of the 10,000 Year Old Man). That people in Britain at this time were likely to have been dark-skinned, however, had already been known by scientists.

Cheddar Man’s genetic profile, said Thomas in a release, ‘places him with several other Mesolithic-era Europeans from Spain, Hungary and Luxembourg whose DNA has already been analysed. These “Western hunter-gatherers” [WHG] migrated into Europe at the end of the last ice age, and the group included Cheddar Man’s ancestors’.

Ancient DNA analysis is increasingly showing the history of modern Europeans to have involved several significant genetic changes resulting from migrations and mixing. There are remains of more ancient humans from Gough’s Cave, from whom Cheddar Man was not directly descended, and only around 10% of modern indigenous British ancestry can be linked to the 10,000-year-old skeleton.

The research paper was put online ahead of peer review on 19 February, titled ‘Population replacement in Early Neolithic Britain.’ Authors include Alison Sheridan FSA, Mike Parker Pearson FSA and Chris Stringer. Cheddar Man’s genome represents one of six Mesolithic British individuals, and along with that of 16 new Neolithic and 51 previously published Neolithic British individuals, is used to characterise the Mesolithic and Neolithic populations of Britain. The scientists conclude that the transition to farming at the start of the Neolithic 6,000 years ago was accompanied by incoming continental farmers.

A study released last year also in preliminary form claimed that around 4500 years ago, the time Stonehenge was built, the then indigenous UK genome was all but displaced by migrants from the Continent who made Beaker-style pottery (see Pots on the March, Salon 388). The 10% of WHG DNA seen in modern white Britons could be derived from these Beaker people. They would have picked it up from intermixing with Neolithic Continental populations with a proportion of WHG in their genome.

Stringer, Research Leader in Human Origins at the NHM, first excavated at Gough’s Cave 30 years ago. He said in a release, ‘I first studied Cheddar Man more than 40 years ago, but could never have believed that we would one day have his whole genome – the oldest British one to date!
End Quotation