We began with an introduction to the City of London and its 'democratic' (not) system.  Castle Baynard has an ex Lord Mayor as its Alderman (but that must be true of at least 50% of them).  He is public school educated but not Oxbridge and is a Tax expert who began with Arthur Anderson. 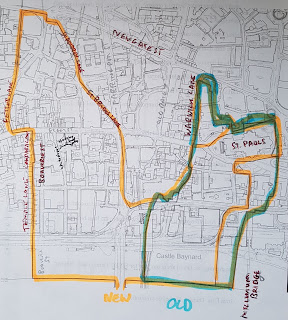 We discussed the weird change in the area of the Ward in the reforms of 2003.  It was roughly from St Paul's south to the River until 2003 when they added an enormous (more than doubled the size of the ward) area outside the Wall in the Fleet Street area.  It is almost cut in half by an inroad of Farringdon Within Ward.  The shape is called the Tuning Fork. The explanation I don't know but the reform must have been based on equalising the wards in terms of 'population' or 'electors' or amenities and facilities.

This is my sketch map.  The yellow is the new boundary, the blue/green is the historic one. You will see that Queenhithe has taken a bite out of the East boundary - if you look there is a sort of nose just under St Pauls, that is the St Pauls Tourist Information Kiosk which Queenhithe must have particularly wanted or needed?

The Ward also lost that 'arm' pointing up which is essentially Warwick Lane.  The major addition is the old printing area west of Farringdon Street and East of Temple Gardens, and the area north of Fleet Street and East of Fetter Lane.  It seems to me that they have shunted together 2 disparate areas with completely different histories.

The Walk turned out to be about:

The War of The Roses as the College of Arms used to be Derby House which was where Lord Stanley (King of Mann and created Earl of Derby)  and Margaret Beaufort (mother of Henry VII)  lived. They stitched up Richard III at Bosworth Field.  Edward IV was proclaimed King at Baynards Castle  (as was Edward IV; Lady Jane Grey and Queen Mary). Buckingham suggested Richard III should become King here too.  Warwick lived in the area, as did Clarence (Le Erber).  There were various War of the Roses events at St Pauls although the most interesting was the 'Love Day' Procession where Henry VI hoped for an outbreak of love and peace by promoting a walk from Westminster to St Pauls. the Duke of York (Richard and Edward's dad) walking alongside Henry VI's wife (Margaret).   It had about as much chance of working as solving Brexit by getting Corbyn and May to hold hands on a similar walk.  I think they would have liked each other almost as much.

Shakespeare - the Carter Lane letter; print shop at the Sign of the White Greyhound,  Coat of Arms at College of Arms; Blackfriars Theatre and the Seven Ages of Man Statue at the Brutalist Baynard  House.

The statue shown above by Richard Kindersley was for me a highlight. I have pointed this out on many coach tours but only went up to see it again a couple of months ago.  It was therefore nice to read from Jacques speech in 'As You Like It.'

Telecoms. Opposite the HQ of BT is the Faraday Building which turns out to be London's first Telephone Exchange and then the World's first International Telephone exchange.

We had drinks in the Blackfriars and the Cheshire Cheese. The former being perhaps the most spectacular pub interior in London, and the latter the most historic? 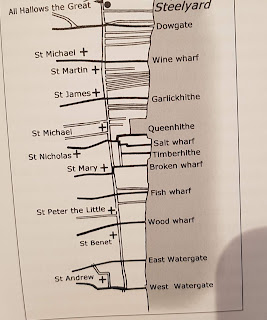 I had to deal with the waterfront too briefly but was very excited in my research to come across a reference to Chaucer's Shipman. I am seeking to find out if I am the first person to notice this connection. (I doubt it!). Medieval waterfront shown to left.

We finished off with a quick trip through, Bridewell Palace, St Brides, Hogarth and Hanging Sword Alley and the Daily Express Building.

Fabulous Walk it turns out.