Showing posts from June, 2006
Show All

Leighton House and V &A

June 30, 2006
Took my group to Leighton house and the V&A - both as wonderful as ever - can't quite understand why there is always a few who wonder why I include Leighton House in the itinerary!
Post a comment
Read more

Future of the Art Space 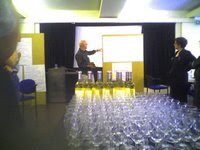 Excellence afternoon conference organised by Central St Martin's. Student projects really successful and the discussion was great! It is the culmination of projects looking into art spaces - galleries, theatres, concert halls in 2015 the projects mostly looked at unconventional ways of delivering art. The introduction was by Charles Leadbetter and he given an excellent summary of what the future may have in store for the arts. We then split into groups. I facilitated the 'Risky Projects' Group. Each group reported back after an hour's discussion and Charles Leadbetter summed up. It was very well organised by Central St Martins and the students of the Creative Practice for Narrative Environments Course - there were specially made table clothes on which we made notes, corrugated cardboard partitions doubling up as notice boards and a really good discussion. The main focus seemed to be on participation and distributed arts. Our group considered the problems of
Post a comment
Read more

June 30, 2006
Thursday gave lecture on Stuart London - concentrated on Cromwell - we did a nice piece dramatising Charles 1st defense. He believed he represented the people more independently than the venal house of commons.
Post a comment
Read more

June 28, 2006
SALON-IFA: from the Society of Antiquaries and the Institute of Field Archaeologists Salon-IFA 140: 22 May 2006 SALON-IFA Editor: Christopher Catling christopher.catling@virgin.net Issue 141 will go out on 5 June 2006 Skulls, DNA and human hybridisation Numerous stories have appeared in the press over the last two weeks concerning the results of bone studies and DNA analysis, so here is a quick round up of the main findings. First, Professor Dr Robert D Martin, Provost of the Chicago Field Museum and world-renowned primatologist, has published an article in the journal Science stating that the skull found in Flors, Indonesia, is not that of a new species (Homo floriensis, aka ‘The Hobbit’) but is that of a microcephalic (congenitally small brained) individual who lived into adulthood. This is the third such study to reach that conclusion, and it results from an exhaustive comparison of the Flores skull and those of 100 human microcephalics. For the full story see the Ge
Post a comment
Read more 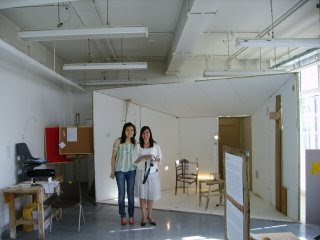 The final show for the course I lecture on is on this week - really well worth a visit. All day 12 - 8pm till Saturday at Backhill, Clerkenwell.
Post a comment
Read more

London Architecture Biennale Below and Above Guided Walks

June 28, 2006
Just come out of very busy period. Last week I organised 3 guided walks for the London Architecture Biennale. Each one was led by an archaeologist and an architect and we went around London discussing what was below ground and above ground. The walks were very successful - well attended and lots of great information and insights into the City. The architects were Ken Greig of Greig Stephenson, Terry Brown of GMW Ltd and Andrew Waugh of Waugh Thistleton Architects. The archaeologists were Julian Bowsher and Gorden Malcom of the Museum of London Archaeological Service and Gustav Milne of UCL, Institute of Archaeology. See Flickr
Post a comment
Read more

June 15, 2006
Anger at secret plot to demolish the Commonwealth Institute A leaked letter revealed last week that Government ministers were plotting to demolish the Grade II* Commonwealth Institute (CI) in London by means of a short bill to be pushed through Parliament delisting what is considered to be one of London’s finest post-war buildings. The letter, which was leaked to the Twentieth Century Society, said that the CI’s trustees believed ‘substantially greater value could be realised if it were possible to alter the building substantially or demolish it altogether’, but that trustees were ‘unwilling to rely exclusively on [listed buildings consent for demolition] because the unique conditions that arise in this case cannot be taken into account by the local planning authority’. The letter was signed by Tessa Jowell, the Culture Secretary, and Margaret Beckett, the Foreign Secretary, and sent to Ruth Kelly, the new Communities and Local Government Secretary, responsible for planning and
Post a comment
Read more

How to Read A Church

June 07, 2006
just finished reading 'How To Read A Church' by Taylor, Richard Rider. London 2003 Interesting book to understand Church images but a little disappointing as it really is a list of biblical stories/subject matter and has not widened my insight into Church interpretation. Although I'm sure will have a useful place on the book shelf.
Post a comment
Read more

The Great Fire of London

June 06, 2006
Just finished reading 'By Permission Of Heaven, The Story Of The Great Fire Of London' Tinniswood, Adrian by Pimlico, London 2004 Quite enjoyable but not as good as Gustav Milne's book on the Great Fire published in the 1980's.
Post a comment
Read more
More posts