Showing posts from April, 2016
Show All

10 ways for Museums to boost their social media

April 27, 2016
Alec Ward of the Museum of London just delivered an excellent session on Social Media. Here are my 10 points 1. Posts do much better if they have an image or a video.  You can now post video straight to Facebook, and evidence suggests that videos are often seen without sound. So bear this in mind when making them.  Infographics site Venngage can help produce engaging graphics. 3d Images are now easy to do 2. Target  your posts to your audience. Find out about your audience using the analytics packages with your SM platform. Use these to monitor results of posts and fine tune. 3 Post at the best time for your audience.  Social media stats can be found at 'shortstack'  This suggests 10am and 3pm are the best time to post but it  depends on the audience. In general 9am - 7pm best time. 4. Creating posts beginning Top 10 or Top 5 - often gets an audience 5. Use your collection to create great stories. Don't just post upcoming events, tell a story and then men
Post a Comment
Read more 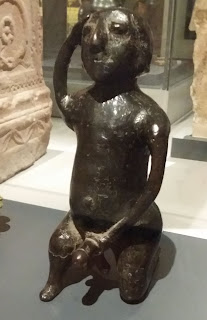 Here is an article about aeoliphiles of which there are 3. Ashmolean Museum - Jack of Hilton Dr Arthur MacGregor, FSA FLS,  describes the one belonging to the Society of Antiquities as  ‘dug up from the bason of the canal at Basingstoke in Hampshire and purchased by him at an old Iron Shop in that town, to the proprietor of which it had been sold by one of the labourers’ Perhaps the most famous is one in the Ashmolean Museum which is called,Jack of Hilton. The Society's web site describes the ritual 'marking the payment of rent described in Robert Plot’s Natural History of the county in 1686: ‘The Lord of the Manor of Essington . . . shall bring agoose every new years day, and drive it round the fire in the Hall at Hilton, at le[a]st 3 times . . . whil’st Jack of Hilton is blowing the fire.’ A third one from Tamworth figure was flung into a pond in recent times in disgust. This is interesting because if these were prehistoric their explanation would be &#
Post a Comment
Read more

April 21, 2016
This is the place to find the Complete Shakespeare Walk taking place this year on 23 and 24th April 2016 The Complete Walk / Shakespeare's Globe
Post a Comment
Read more
April 19, 2016
"History Today" has an article on Domitian's Eunuch http://www.historytoday.com/ llewelyn-morgan/eunuch-and- emperor Martial's poems on the subject are here: http://www.stoa.org/diotima/ anthology/earinus.shtml
Post a Comment
Read more

April 12, 2016
Interesting radio programme on Radio 4 about Plotto, where William Cook gives a foolproof method of getting a story together. http://www.bbc.co.uk/programmes/b06sny8v Although, I do hate all such 'writing by numbers' methods, this looks like fun. Plotto: The Master Book of All Plots by William Wallace Cook — Reviews, Discussion, Bookclubs, Lists
Post a Comment
Read more

April 07, 2016
I used to wonder whether they had based this on Dickens' Circumlocation Office, but this was all to the good. The V&A Circulation Department was a heroic 20th Century attempt to bring Culture to the Masses in the Regions, and then, because of Government Cuts, it got the chop in 1977.   I'd quite like to know how much of a fight Sir Roy Strong put up to retain it.  I mentioned in when I revised Sir Roy Strong's wikipedia page. Read something of the noble history of the Circulation Department here http://www.vam.ac.uk/content/journals/research-journal/issue-no.-4-summer-2012/room-38a-and-beyond-post-war-british-design-and-the-circulation-department http://www.vam.ac.uk/content/journals/research-journal/issue-no.-4-summer-2012/room-38a-and-beyond-post-war-british-design-and-the-circulation-department
Post a Comment
Read more

April 07, 2016
No different to selling Coffee, audience segmentation is rife in the Museum and Heritage World. Here is a guide and a  couple of examples of how it is used. https://www.theaudienceagency. org/insight/segmentation-made- simple  Much of it is based on Mosaic which divides us up like specimens in a Natural History Museum tray: http://culturehive.co.uk/wp-content/uploads/2013/07/AF_-An-Overview-of-Mosaic-Profiling-Groups-2009.pdf More on marketing (and more) can be found here http://culturehive.co.uk/ authors/the-audience-agency/
Post a Comment
Read more

April 07, 2016
A friend directed me to this interesting site, to remind people that Britain has always been a place of immigration. It has some very interesting information. England's Immigrants 1330 - 1550 And I found one Giles Flude [48922] which increases the chance that Flude is a foreign name. Surname: Flude Forename: Giles Gender: Male Place of Origin: Holy Roman Empire (Empire) Prior Residence in England: 32 years Original Document: C 67/72, m. 3 (letters of denization, c. 1539 - c. 1541) Notes: English wife. Biographical Notes: No Notes Relationships: No Relationships Link: https://www. englandsimmigrants.com/person/ 48922 (via shareaholic.com )
Post a Comment
Read more

April 07, 2016
This is an example of an online Museum. This is a collection of programmes that damage or disable your computer!.  Sound scary?  Well, the folk at archives.org have stripped out the nasty bits and left a visual record of the leading malware programmes. Our virtual history. The Malware Museum : Free Software : Download & Streaming : Internet Archive
Post a Comment
Read more

Perspective tour of the National Gallery

April 01, 2016
I wrote this quick tour for one of my students for her M.A project. She will be creating a much better framework for it. https://www.nationalgallery.co.uk/products/the-virgin-and-child-enthroned-with-narrative-scenes-print/p_NG564 The Virgin and Child Enthroned, with Narrative Scenes Margarito of Arezzo. C 1263 This is a typical 'Byzantine' style of medieval painting. It is a story-telling painting with scenes from various saints lives. The figures are static and the spaces unreal. It is very beautiful with copious use of Gold Leaf and the main role of the painting is to tell the stories of the Saints. http://www.nationalgallery.org.uk/paintings/giotto-and-workshop-pentecost Pentacost. Giotto c 1310 In this Florentine painting, you can see Giotto groping towards an understanding of perspective. The room is not quite 3 dimensional, but he has created a sense of space. The people similarly are becoming more realistic, and clearly
Post a Comment
Read more