Showing posts from March, 2016
Show All

Create your own tour app.

‘Innocence of Memories’ on Vimeo

March 23, 2016
This is a film based on Orhan Pamuk's 'Museum of Innocence' a film about longing, or perhaps obsessive love, and about Istanbul. ‘Innocence of Memories’ on Vimeo
Post a comment
Read more

Gallus, the Cybele and Roman Eunuchs

A recent posting in the Britarch mailing list referred to a Poem of Catullus which mentions, it was said, a Eunoch of the Goddess the Cybele.    I often use a poem by Ovid which mentions the 'Votaries of the Cybele ululating in high pitched chorus with their Phyrgian Fashions'  and so looked up the Poem - Poem 78 http://rudy.negenborn.net/catullus/text2/e78.htm This left me in some doubt as to whether the poem is about a Eunuch  Although the context of Poem 78 is following poems about the Cybele, and one meaning of a gallus is a eunuch of the Cybele. but as you will see, in this translation, Gallus is married.  Wikipedia also tells me that Gallus can mean many things, including: People several ancient Romans; see Gallus (cognomen) ... Gallus , the Latin word for an inhabitant of Gaul Gallus , the singular form of Galli , the eunuch priests of Cybele Animal-related Gallus , the Latin word for rooster or cockerel Gallus (genus) , a bird genus in the phea
Post a comment
Read more

Mad Frankie Fraser and the Criminals of London

March 17, 2016
Take a look at these two clips to get a fascinating and horrifying glimpse into the lives of the tradational cockney criminal Mad Frankie Fraser talking about burying an axe in Eric Mason's Head https://www.youtube.com/watch?v=hgUX1t5jiiU Eric Masons talking about Mad Frankie Fraser burying an axe in his head https://www.youtube.com/watch?v=BbYBcEMsX98
Post a comment
Read more 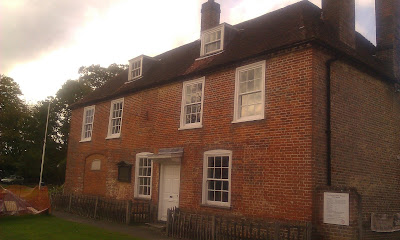 The Council web site has a literary walk around Chawton, where Jane finished off most of her work. The Austen's Cottage in Chawton     http://www.easthants.gov.uk/sites/default/files/documents/JaneAustenWalk.pdf
Post a comment
Read more

Welcome to the Experience Economy