Showing posts from March, 2009
Show All

Demonstrations in London and Transport for London

March 31, 2009
Four horses G20 demonstration tomorrow and absolutely nothing about it on tfl web site! Planned engineering works for specific date | Transport for London Its quite astonishing - imagine a tourist planning a trip to Bank for tomorrow. Is there noone with brains at TFL?
1 comment
Read more

Inspiring learning for all - Home

March 30, 2009
The government and the MLA are pushing, at last, a learning for all agenda. As a start they have upgrading the following web site: Inspiring learning for all - Home
Post a comment
Read more

March 30, 2009
Mary Beard's favourite Roman Joke: ‘Three men — a scholasticos (an ‘egghead’), a barber and a bald man — went on a long journey and had to camp out at night. They decided to take it in shifts to watch over their luggage. The barber took the first shift but got bored. To pass the time, he shaved the head of the sleeping scholasticos — then woke him up to take his turn. The scholasticos got up, rubbed his head and found that he had no hair. “What an idiot that barber is,” he said: “he’s woken up baldy instead of me.”’ Classic gags discovered in ancient Roman joke book | Books | guardian.co.uk
Post a comment
Read more

March 30, 2009
A new reference to Robin Hood has been found placing him in the reign of Edward 1 in Sherwood Forest and a notorious Robber. Medievalists.net � Interview with Julian Luxford
Post a comment
Read more

March 19, 2009
I like the idea of the snug "The snug The 'snug', also sometimes called the Smoke room, was typically a small, very private room with access to the bar that had a frosted glass external window, set above head height. You paid a higher price for your beer in the Snug, but nobody could look in and see you. It was not only the well off visitors who would use these rooms. The snug was for patrons who preferred not to be seen in the public bar. Ladies would often enjoy a private drink in the snug in a time when it was frowned upon for ladies to be in a pub. The local police officer would nip in for a quiet pint, the parish priest for his evening whisky, and lovers would use the snug for their clandestine visits." Public house - Wikipedia, the free encyclopedia :
Post a comment
Read more

Why museums have become our home from home - Times Online

March 18, 2009
I've been using furl to organise my bookmarks for years. I also use it to export the web links to my web site live. It works very well but now - Furl is dead. It has sold itself to diigo, which I do hope has the same export system that Furl have. This could be a very sad day or a more forward depening on diigo. Furl | Your Favorite Bookmarked URLs, Fast. Furl.it!
Post a comment
Read more

Is this the true face of the Bard we see before us? Shakespeare painting is 'only surviving portrait painted from life' | Mail Online

March 18, 2009
Stanley Wells reckons this painting is of shakespeare. Is this the true face of the Bard we see before us? Shakespeare painting is 'only surviving portrait painted from life' | Mail Online
Post a comment
Read more

Diigo - 'you are what you annotate'

March 18, 2009
Furl has sold its members to Diigo which claims to be social bookmarking 2.0. Here is what it says about itself YouTube - Diigo V3: Highlight & Share the Web! Social Bookmarking 2.0
Post a comment
Read more

Sex and scandal in the eighteenth century

March 17, 2009
**Sex and scandal in the eighteenth century** The Hunterian Museum < http://www.rcseng.ac.uk/museums > 's spring season of evening lectures presents four authors whose recently-published books explore stories of sex, scandal and celebrity in Georgian London. To book please call 020 7869 6560 or email museums@rcseng.ac.uk <mailto: museums@rcseng.ac.uk > . Tickets cost £5. The Hunterian Museum will be open on the night to lecture ticket holders from 6pm. Hunterian Museum at The Royal College of Surgeons 35-43 Lincoln's Inn Fields London WC2A 3PE **The surgeon, the countess, her husband and his lover** Thursday 19 March, 7pm Wendy Moore John Hunter, the pioneering surgeon, and Mary Eleanor Bowes, the eccentric Countess of Strathmore, were fellow science enthusiasts and friends in the electrifying atmosphere of Enlightenment London. But when the countess was tricked into marrying a wily Irish fortune-seeker, Hunter was drawn into a murky world of clandestine births, i
Post a comment
Read more

Someone has commented on my book on Amazon

It has taken since 1990 but someone has actually posted a comment on Paul and my book, the Citisights Guide to London. Posted on amazon.com not .co.uk which is why I have not seen it before. They said, in 2004: Pretty good and pretty handy , February 18, 2004 By A Customer I actually took the "Victorian london" walk (from the older 1990 version), which was basically a "Charles Dickens' london" tour. It was really enjoyable, though, because all the major landmarks are augmented by a description from the writer! The book is about the 900,000 best seller on Amazon! I also enjoyed the "Dark Age, Saxon & Viking London" walk, all ruins, hidden plaques, ancient churches, old river markings, nascent city gates and age-old markets--very arresting!
Post a comment
Read more

Alan Vince - a life in archaeology

March 14, 2009
I was very sad to hear of Alan Vince's death. I worked with him in the 1980's at the Museum of London where I set up the first computer facility. It was Alan and Paul Tyers who immediately saw the potential for pottery studies. We had great fun using the relatively primitive facilities the UNIX computer provided, creating simple programmes that helped Alan get to grips with London's pottery. He seemed to have one of those minds which is not overwhelmed with detail and which can find a direction through a host of possible false leads to come to a very practical conclusion. He was instrumental in discovering that the saxon City was in the Aldwych and wrote an interesting book about the subject. This is his obituary taken from SALON IFA 209 Obituary: Alan Vince, FSA Friends of the late Alan Vince have combined their recollections to produce the following appreciation of his life and achievements. ‘Alan Vince (born 30 March 1952; died 23 February 2009, aged 56) was
Post a comment
Read more

Make your own book with Blurb

March 14, 2009
This is a reasonably priced print on demand project that offers the opportunity of producing really attractive one-off coffee table books. Make your own book with Blurb
Post a comment
Read more 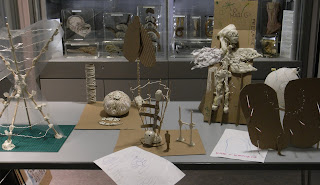 3 of My CSM students successfully gave a workshop with girls from La Sainte Union school in the Hunterian Museum today. The project was initiated by Camden Council, and was a very successful collaboration between Camden, Hunterian and CSM. Marina, Georgiana and Leegoo did really well and were given great support by Jane Hughes and Kim Biddulph. The idea was to use the collection and to look at local architecture and using this inspiration to create a sculptural sign to display outside the Hunterian. The ideas were really great!
Post a comment
Read more

I took my Worcester Students to London and took them around the V&A, Natural History Museum and the British Museum. Quite a whistle stop tour, but it gives them a good grounding in the major museum design styles. Most interesting is that the old Geology Museum and the Science Museum has 'lost' their old building behind exhibition display, while the V&A and the Natural History Museum glorify in theirs. V&A's new sculpture gallery is divine, I just love it!
Post a comment
Read more

I gave two guided walks at the weekend, one on Myths and Legends of London, the other on the archaeology of Bermondsey. I asked Alistair Douglas who has excavated extensively in the area to help me on this walk. It is another in the series of dialogue walks I first tried at the London Architectural Biennale. It works really well. We got about 50 people and despite the rain did a great walk around Bermondsey. Route, was London Bridge Station, St Olaf's, Bermondsey Street, Leathermarket Street, Long Lane, Bermondsey Square, Abbey Street.
Post a comment
Read more

March 03, 2009
I gave a walk for 30 Primary school children based on Roman London. We started at the Tower, walked down to Billingsgate and onto the Guildhall where we went into the Amphitheatre. Good group, interested - slightly long walk, might be better to do the Walls around the Museum of London. BBC - Romans - Roman Resources
Post a comment
Read more

March 01, 2009
Dear all, The Old Operating Theatre Museum is now hosting regular talks on weekends. Speed Surgery - A live demonstration of surgery before anaesthesia Every Saturday at 2.00pm- And you can take the amputed leg away with you if you want! Herbs & the Herb Garret- A talk on the history of the museum and the use of herbs in medicine Every Sunday at 2.00 pm- And you can try some of the remedies at home...the mother-in- law will be impressed! And always check our ewbsite for the last minute events!!!! www.thegarret.org.uk -- If you do not want to receive any more newsletters, http://chr.org.uk/lists/?p=unsubscribe&uid=3e05edbffb985b71c6b062af1654a444 To update your preferences and to unsubscribe visit http://chr.org.uk/lists/?p=preferences&uid=3e05edbffb985b71c6b062af1654a444 -- Powered by PHPlist, www.phplist.com --
Post a comment
Read more
More posts