Showing posts from July, 2009
Show All

July 29, 2009
Ian Nairn defined subtopia as 'the annihilation of the site, the steamrollering of all individuallity of place to one uniform and mediocre pattern' Quoted in ' A Journey through Ruins - the Last Days of London by Patrick Wright Oxford Univeristy Press 2009 - an interesting book about Dalston and Mrs Thatcher.
Post a Comment
Read more

July 29, 2009
Really good news - the Old Operating Theatre Museum is to be supported by the Charity of Guys and St Thomas to purchase a long term lease!
Post a Comment
Read more

July 28, 2009
Salon IFA reported the following: The virtual museum One Fellow has already suggested that the simple answer to the British Museum’s need for more exhibition space is to ‘move most of the museum to the Olympic site in 2013 — good access and all the rest, and just leave the favourites well spaced out in Bloomsbury’. But the BM’s own Director has come up with an even less space-hungry suggestion: in a debate on the museum of the future held at the London School of Economics to celebrate sixty years of the publisher Thames & Hudson, our Fellow Neil MacGregor said that the relationship between institutions and their audiences would be transformed by the internet and that museums would become more like multimedia organisations. ‘The future has to be, without question, the museum as a publisher and broadcaster’, said Neil MacGregor, a view that was shared by the Tate’s Director, Nicholas Serota, who said: ‘I am certain that in the next ten to fifteen years, there will be a limited num
Post a Comment
Read more

Changes to The Wallace Collection

July 22, 2009
Took my University of Westminster Group to the Wallace Collection today - they are rehanging the collection to make way for a Damien Hurst Exhibition. Ouch! I had a really good route worked out, avoiding the 'dirty dutch' paintings which gave a good narrative of the Collection but now ruined as they have closed one whole wing down and you have to go through the Dutch paintings. It means the French paintings are now so well displayed and could not see any of the minatures. I guess the ruination of my tour is a small price to pay for innovation but change is painful! Tea is still outrageously expensive here - more expensive than coffee - now why is that? The Wallace Collection
Post a Comment
Read more

July 22, 2009
Web site for those who want to take an architectural walk around London. London Architecture Walks | Home
Post a Comment
Read more 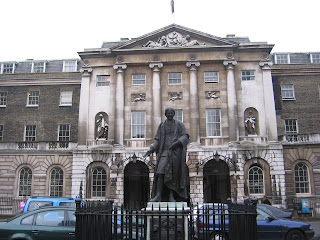 Colin at work discovered a database of sculpture which gave the following details re the Cupids on the Front of Guys. Strange how I had not noticed! 'The bas-relief panels are as follows: that on the left depicts a cherub holding a leech, the one in the middle, one with a tourniquet and that on the right, a cherub with a lancet in one hand and in the other a multi-bladed scarificator. The whole sculptural programme, including the two niche statues (see entry below) was intended to symbolise the art of healing.'
Post a Comment
Read more 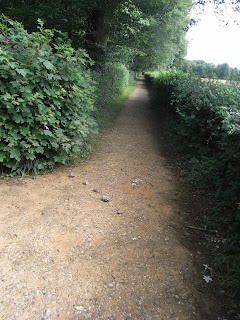 I spent last week running a course on Darwin to celebrate his 200th anniversay. It was really very enjoyable - I took three groups around Downe House darwinatdowne.co.uk It was here that he did most of his work - they are applying for World Heritage Status as this area is essentially his outdoor laboratory. Its amazing that it is but 16 miles from London and yet so utterly rural. This is the reason Darwin stayed there. The house is well interpreted - using a pda system which is useful for the garden in particular. But I also organised a guided walk around the fields - really enjoyed it although would have been better if my natural history were up to my history. I managed a one point to mention newton, darwin and dickens in one sentence and it made sense! I feel if my own education has been finished off as I can now include darwin in my world view while before he was in a separate scientific sphere. I organised a tour to Oxford University Museum where we were given special ent
Post a Comment
Read more
More posts