Showing posts from March, 2007
Show All

March 30, 2007
Letter I have written to Museum Practice I was very interested to read your stimulating article 'Poetic Justice' about the Anna Akhmatova Museum in the spring 2007 issue of Museum Practice . It addressed the problem that faces the literary version of the 'personalia museum' in balancing the narrative strands necessary to make a satisfactory Museum experience. Firstly, there is the life story of the person with all the associated 'memorabilia' to deal with. Secondly is the desire to recreate to recreate room settings to reflect the lifestyle of the writer and thirdly and most difficult to achieve is the need to reflect something of the writers work in a three dimensional space. Your earlier article about the Thomas Mann Buddenbrookhaus reviewed in the Winter 2003 issue showed one innovative approach to building in a element of the literature into a personalia museum. This latest article continues the literary theme. But what was impressi
Post a Comment
Read more

Guardians of the Theatre Museum 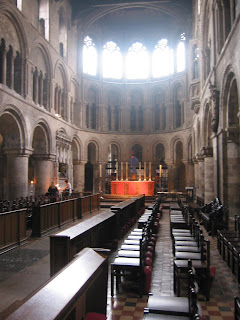 What a sad day! St Barts Church has introduced charging for visitors. This has been one of the highlights of many tours I have made to London. It will now have to be dropped. Such a lovely place and such a pity that the Church has fallen prey to Mammon. Keyword archaeology
Post a Comment
Read more

March 26, 2007
This is an excellent example of a web site. They have a really good email distribution list which contains information re science and medicine. I find it very useful. Centre for Life � Home
Post a Comment
Read more

March 21, 2007
This is a UK TV programme looking for Britain's best historic site - you can vote for 'the old operating theatre museum' here! The show is on Monday nights from april 9th and is available on Freeview in the UK. UKTV History: Britain's Best
Post a Comment
Read more

Dark Age finds at St Martins in the Fields

March 16, 2007
The Museum of London Archaeology Service has reported (Archaeology Matters, Feb 2007) finding a kiln close by a burial of a middle aged man. The Radio Carbon date of the man (410AD) and the archaeomagnetic date of the kiln (400 - 450) suggest a site continuing beyond the end of Roman London (usually formally dated to 410AD). Also on the site was found a a 'richly furnished Saxon burial' complete with silver ring, blue glass cup and hanging bowl containing hazelnuts. Close by was found beads of glass and amethysts and a gold pendant - perhaps another burial. It dates to the mid 6 th Century and around the date of the foundation of the Saxon town of Lundenwic . Although MOLAS do not mention it - is it a coincidence that burials are found on the site of a church? The first mention of the Church dates to 1222 . Further burials from this period have been found next to the London Transport Museum - 9 cremations and 2 inhumations.
Post a Comment
Read more

March 16, 2007
This is an excellent site for advice on Collections - also has an advice line - great for the small museum. Collections Link
Post a Comment
Read more

March 14, 2007
Interesting flurry of emails when the Bartlett Gallery's email system went wrong - and we all got a flurry of outraged complaints. Some were very angry, other annoyed and some amused. I sent the following email: I too would rather not receive everyone's email, but nice to meet you all, out there in Bartlett mailing list land! Maybe we should form ourselves into a flash mob, or meet for an impromptu party? I do feel sorry for the Bartlett though - I guess technically it is an easy mistake to make. I guess the danger is that unscrupulous people might even use this opportunity for some illicit marketing. For example, I might say you really ought to come and visit the amazing Old Operating Theatre Museum, next time you visit Borough Market. http://www.thegarret.org.uk But I doubt anyone would do that would they? To which I got charming replies and heard from a couple of old acquaintances. One person suggest we had formed a Karass in Vonnegut's Cat
Post a Comment
Read more

March 13, 2007
Salon IFA 160, 12th March reports: Archaeologists discover Roman village at foot of Silbury Hill A Roman settlement has been discovered by archaeologists at the foot of Silbury Hill. The discovery was made as part of a project to stabilise the hill after the top caved in seven years ago. The linear settlement, with plots and alleys set at right angles to the main thoroughfare, straddles the Roman road (the modern A4) to the south of Silbury Hill to the west of the point where the road crosses the River Kennet. Our Fellow Bob Bewley, currently English Heritage Regional Director for the South West, said that: ‘Without further investigation, it is difficult to say, but it could be that we have a roadside village, where travellers would change horses or stay overnight on the way to the sacred springs and bathing pools at Bath, but also possibly a place of pilgrimage in its own right focused on Silbury Hill.’ Keyword Archaeology
Post a Comment
Read more

March 13, 2007
Salon IFA 160 12th of March reported the following: Precision dating transforms interpretation of Neolithic long barrows Long-held views about the longevity of Neolithic long barrows are being challenged by a ground-breaking dating programme led by English Heritage in association with Cardiff University and the University of Central Lancashire. The end of the active use of barrows at Ascott-under-Wychwood, Hazleton, West Kennet and Fussell’s Lodge was previously thought to be separated by centuries. Using Bayesian statistics to analyse radiocarbon dates, archaeologists involved in the project have found that burial at all four ended within a decade or so of 3625 BC. On their own, radiocarbon dates provide broad date ranges spanning 250 years or more. Bayesian statistics involves narrowing down the probability that the date range lies within a far shorter time period. Precise dating suggests that the use of long barrows was short-lived and intensive. Few barrows were used
Post a Comment
Read more

March 13, 2007
Heritage Protection for the 21st Century : White Paper published Heritage Protection for the 21st Century has been published (copies can be downloaded from the Department for Culture, Media and Sport website . rumours that suggested the end of Grade II* listing have proved to be wrong - the listing grades continue as before, although separate categories for archaeology, architecture, natural environments have been scrapped.
Post a Comment
Read more

March 13, 2007
Commonwealth Institute not a 'special case' Tessa Jowell reported to Parliament: ‘We have encouraged the Commonwealth Institute to work with English Heritage on a listed building consent application which we understand they hope to submit to the Royal Borough of Kensington and Chelsea later this year. We have no plans to introduce a bill that will give powers to demolish all or part of the buildings on the Commonwealth Institute site’. The Commonwealth had put a lot of pressure on the government to allow them to cash in on land values and allow the demolition of one of the most interesting modernist buildings in London.
Post a Comment
Read more

March 07, 2007
I received an email about taking a Year 3 group around London on a Roman London Walk. This is what I replied. It seems to me to be quite young, and, if you had the option I, personally, would suggest going to St Albans where the remains of Roman Verulamium provide a great introduction to the Romans. There is a the Roman Theatre, a great small Roman Museum, and a big park with Roman walls, and remains of a Roman gate. Kids could run around, enjoy the outside and get an idea of the archaeology of a Roman town. If I were to do it in London I'd link in with visit to the Museum of London and would have a short walk as follows: 1. Visit the Site of the Roman Amphitheatre in the Guildhall Yard 2. Go into the Art Gallery to see the remain of the Roman Amphitheatre 3. Walk along Gresham Street where recent excavations have revealed Water Wheel, Roman Temple, Roman Houses, and round houses of 'Celtic' style . 4. Noble Street - to see remains of Roman Fort 5
Post a Comment
Read more

March 07, 2007
amazing set of towers around 2,300 years old in Peru. Professor Chris Ruggles says "So, on the summer solstice, which is in December in Peru, you would see the Sun just to the right of the right-most tower; for the winter solstice, in June, you would see the Sun rise to the left of the left-most tower; and in-between, the Sun would move up and down the horizon." There was an observation point designed for at best 2 or 3 people to watch as the Sun rises through one of the niche's between the towers on the horizon. BBC NEWS | Science/Nature | Towers point to ancient Sun cult
Post a Comment
Read more

March 07, 2007
The BBC reports that a study at UCL has found an absence of the gene that allows modern Europeans to digest milk. This suggests that the spread of the gene was swift because of the evolutionary advantages of a milk diet. Interestingly enough recent excavations at Durrington Wells suggests they were feasting and some remains were described as being made of 'milk and beef'. This would be around 2,600 - 2,000 BC so this suggests that gene must have spread by the end of the neolithic? BBC NEWS | Health | Early man 'couldn't stomach milk'
Post a Comment
Read more

WebFusion - damned lies and no statistics

March 02, 2007
I have just found out that webfusion, my web host, have changed their system so that web stats are only recorded if you visit the page, each week, otherwise your stats are not processed from the raw logs, and they delete the raw logs - so you lose the data. They introduced this recently without telling their customers, obviously because they did not want raw logs hanging around. Nowhere does it say - you have to visit your webstats page every week for them to work. Support send snotty little emails telling you how it is as if that was some justification for such bad practices. To do it is bad enough, not to tell your customers is unbelievable. Otherwise the service is good enough. I'm putting pressure on them to do something about it and in the meantime am going to have to put a counter on the site! 3 steps backwards.
Post a Comment
Read more

March 01, 2007
I have been creating an on-line art gallery for the Royal Bethlem hospital Archive and Museum - it is a fantastic collection which, over the years, has really grown on me. The work of William Kuralek in particular is really very good. The Museum is in South East London. First draft of the gallery.
Post a Comment
Read more
More posts