Showing posts from February, 2015
Show All

February 28, 2015
This is a great project looking at how people are being forced out of London by the high costs of housing. London Billboards Share Stories of a City That's Just Getting Too Expensive for Many - CityLab
Post a Comment
Read more

Always a favorite visit, particularly when they say take any photos you like, including flash. I've asked the students to consider how they might improve the Museum.   I'm always shocked when some say, improve the cases, lighting, labeling add more information.  One said sell the objects and buy better stuff (tongue in cheek) Very different to quai branle in Paris, which treats all objects as art, but like it the PR does not do context well.
Post a Comment
Read more

February 13, 2015
I have been asked to lead a Wolf Hall study tour. Quite exciting but a lot of research needed.
Post a Comment
Read more 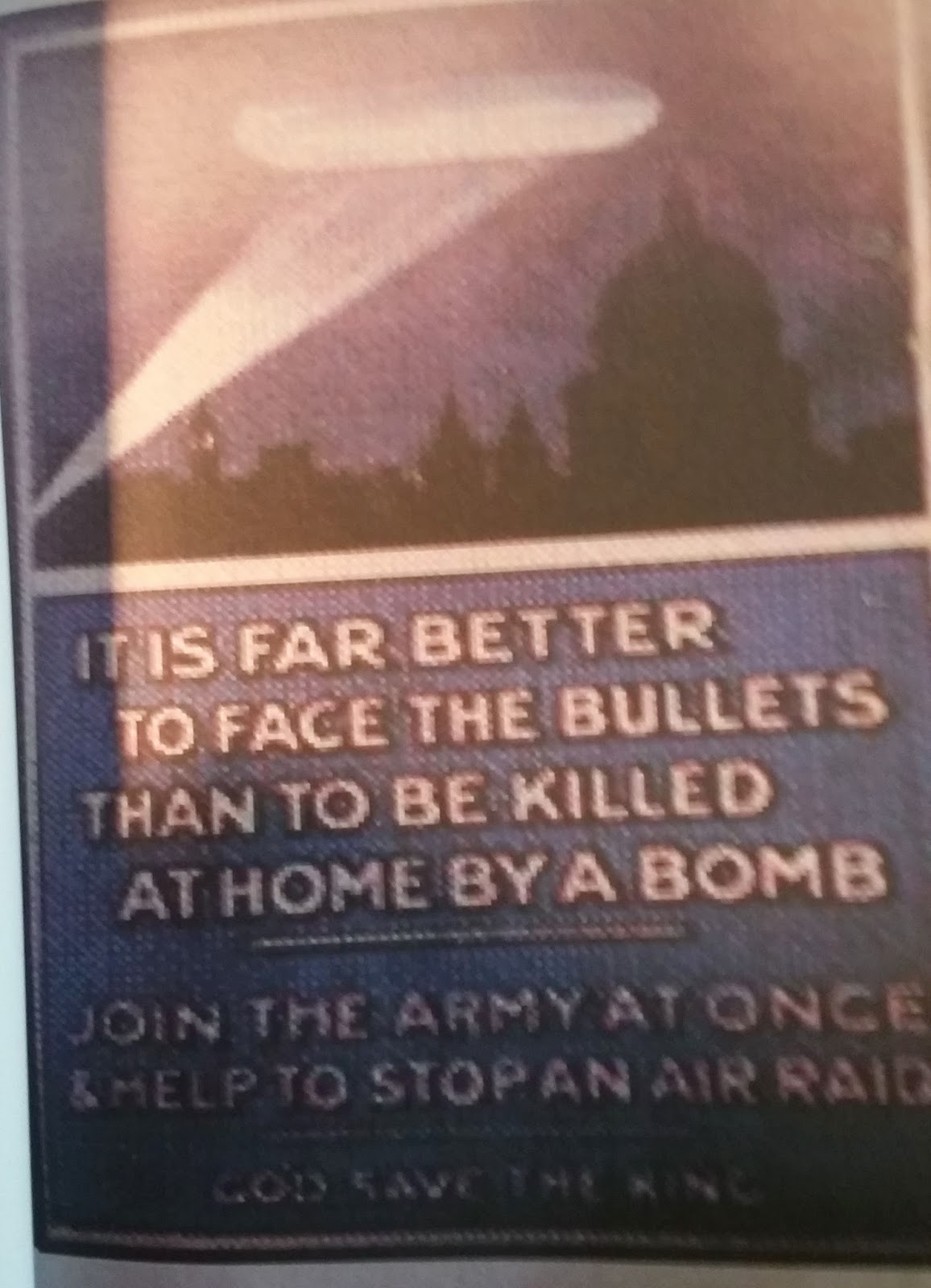 The first Zeppelin Walk I have done when it was not raining or dark. This one was just cold! I was taking around a group of logisticians, very nice group and we had a couple of drinks in the Dolphin and in Smithfield. I discovered that I had been pointing out the wrong clock in the Dolphin Pub to survive the bombing.  Both were set to the right time for the bombing so I guess I can forgive myself.  lovely quiet pub the Dolphin, just across the road from Lambs Conduit St. The Dolphin Clock (the right one) (photo Steve Bowen)
Post a Comment
Read more

At the Synge of the Wodows tracked down?

February 10, 2015
Having drawn a blank as to where Peter Treveris printed his pioneering Great Herbal, I rang the local studies Library, in Southwark, and Patricia was able to track down a reference Treveris working at the 'Sign of the Three Widows'. As to why his title page says 'Wodows' we don't know.  We had no luck finding out where in Southwark the 'Sign of the 3 Widows' was however. Patricia used British History Online Old and New London Volume 6 which is about Southwark, and in the Inns section is this: 'Another inn, called the "Three Widows," was probably a perversion of the "Three Nuns"—the ignorant people after the Reformation confounding the white head-dresses of the religious sisterhood with those of disconsolate relicts. Here, "at the 'Three Widows,' in Southwark," a foreigner, Peter Treviris, in the early part of the sixteenth century, set up a printing-press, which he kept constantly at work for several years, as
Post a Comment
Read more 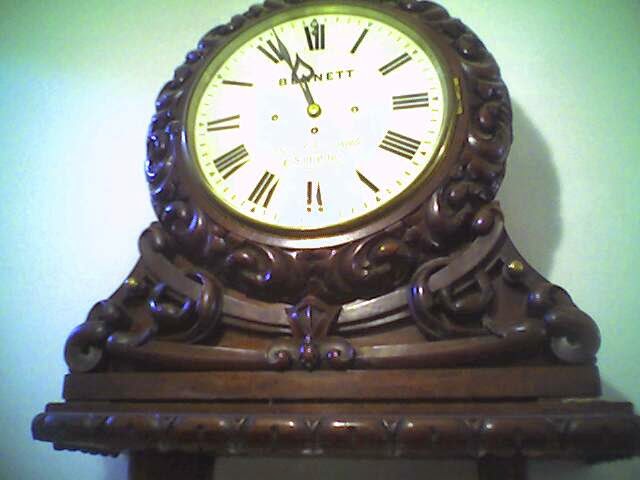 This is the text of a much loved label now missing from Dickens House - its a letter he wrote about his malfunctioning clock. The energy level to write something this funny for an audience of 1! My Dear Sir Since my hall clock was sent to your establishment to be cleaned it has gone as (indeed it always has) perfectly well, but has struck the hours with great reluctance and after enduring internal agonies of the most distressing nature it's has now ceased to striking altogether. Though a happy released for the clock, this is not convenient to the household. If you can send down any confidential person with whom the clock may confer, I think it may have something on its works it would be glad to make a clean breast of. faithfully yours C. Dickens
Post a Comment
Read more

February 09, 2015
This is happening all over London. A lament for the death of bohemian London | John Harris | Comment is free | The Guardian
Post a Comment
Read more 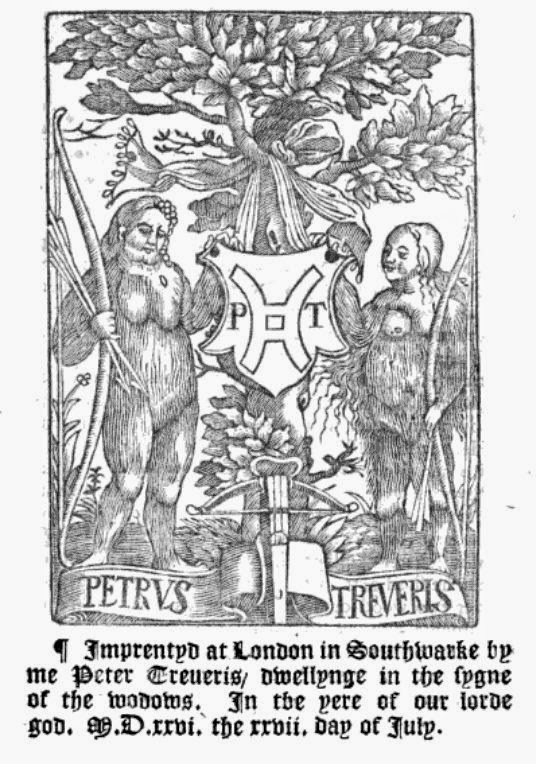 After a little bit of digging around. I discovered some very interesting facts about printing in Southwark.  Dawn Kemp, the new Director of the Old Operating Theatre Museum alerted me to Peter Treveris, the Southwark based printer of the first illustrated Herbal in England, ( Peter Treveris’ Grete herball ). I had not heard of this herbal before, and wondered if it had anything to do with the printing of the first Bible in English by Miles Coverdale in the grounds of St Thomas Hospital, Southwark in 1537. Title Page of Grete Herball A little bit of research established that Treveris was established as a printer at the 'sygne of the wodows'  in 1516.  ( The Stationers' Company and the Printers of London , 1501–1557  By Peter W. M. Blayney; ).  Was this the 'Sign of the Widows'? Treveris was an alien, possibly from Trier, and was a publisher/translator. However,  what was a great discovering was that Treveris also published the 'Handywork of
Post a Comment
Read more

February 09, 2015
This is the first illustrated guide to herbs printed in England in 1529. and it was printed in Southwark. I am wondering whether it was printed by the same people who printed Covedale's Bible. Special Collections » Peter Treveris’ Grete herball of 1529
Post a Comment
Read more

February 06, 2015
This is a short blog article about collecting data for museums with examples from the Louvre and the Charles Dickens Museum in London. Metrics Monday: How Museums Use Demographic Data - EdTrips
Post a Comment
Read more

The Old Operating Theatre Museum on the London Walks Podcast No.27:

February 05, 2015
After an introduction on the British Museum, after the first 10 minutes this is an interview with Kevin Flude talking about the Old Operating Theatre Museum. londonwalks » Blog Archive » The London Walks Podcast No.27: London Museums
Post a Comment
Read more

The Clock of the Long Now

February 04, 2015
Author of 'How buildings learn talks about how to make humans think over the long time - 'The Clock of the London Now' TED talk I think I've found a new hero!  I did not know he was also a 'merry prankster' and IN the 'Electric Kool Aid Acid Test' and editor of the Whole Earth Catalog which must surely be one of the most important influences on the Green movement. Makes me think I have wasted most of my life when I could have been doing stuff like this! Stewart Brand: The Long Now | Talk Video | TED.com
Post a Comment
Read more

Pinned down by your things? Stuffocated? Here is the beginning of the answer

February 04, 2015
From the museum of brands Are you being stuffocated? ...and other thought provoking events - kpflude@gmail.com - Gmail : STUFFOCATION: Living More, With Less Are you being stuffocated? Based on his acclaimed book, James Wallman, explains why we've had enough of stuff and need experience more than ever. Do you have cupboards full to bursting? A cluttered desk? Do you want to organise life's clutter and live more? If so, you're suffering from ‘stuffocation'. The solution, as Wallman will show, is experientialism. This does not mean giving up all our possessions, but it does mean getting over our obsession with them, and transforming what we value. Stuffocation is a vital manifesto for change. It has inspired those who have heard its message to be happier and healthier, and to live more with less. Tuesday 10th Feb. Tickets £15 with free copy of the book
Post a Comment
Read more

February 02, 2015
Now this is the sort of thing I should have done with my walks, years ago! Unreal City Audio
Post a Comment
Read more

We are history - the diggers digging up diggers

February 02, 2015
People used to say you know you are getting older when policemen look too young for the job.  But an archeologist knows he she is getting old when other archaeologists start digging up your excavations and reporting the finds. Here is  Raksha who reports digging up beer cans allegedly left by Canadian archaeologist Prince Chitwood. They haven't found Kevin's teabag yet! Raksha’s Site Diary: the archaeology of the archaeologists | DigVentures
Post a Comment
Read more

The Case of Lady Sannox, by Arthur Conan Doyle

February 01, 2015
This is an article written following the inaugural meeting of a Book Club looking at books with a medical Theme.   This is a short story written in a highly dramatic form by Conan-Doyle. It does not feature Sherlock Holmes, and perhaps because of that it has a cracking pace.   It is a bit-sized story that can be read in a single tube journey.  There is no detection in it, but the style alerts the reader to the fact that there is going to be a surprising possibly horrific ending. The plot has medicine at its heart. Conan-Doyle was a doctor himself, trained in Edinburgh by Joseph Bell whose forensic skills were one of the main influences leading to the creation of the world's most famous fictional detective. There was no wikipedia page, so I set up the following wikipedia entry outlining the plot. This is a short story by Conan-Doyle which features an arrogant Surgeon, Douglas Stone, who is in love with the married Lady Sannox, one of the most beautiful woman world.
Post a Comment
Read more
More posts