Showing posts from September, 2009
Show All

Hamptead - Walk for the Blind

September 21, 2009
I gave a walk around Hampstead for a group of visually impaired people, lead by June Bretherton. There were 2 guide dogs as well as two sighed people acted as guides. Its quite different doing a walk for the visually impaired - a slower more interactive pace is required as we stop to feel street furniture etc, and to read out text in full from plaques and monuments. But it is also fun trying to provide a verbal description of the visual.
Post a comment
Read more

September 21, 2009
Elderhostel, who I work as Course Director, have renamed themselves, Exploritas and lowered the age limit from 55 plus to 21! Exploritas: Welcome to the Exploritas Connection
1 comment
Read more

The Butcher's Shop Live at the Old Operating Theatre Museum 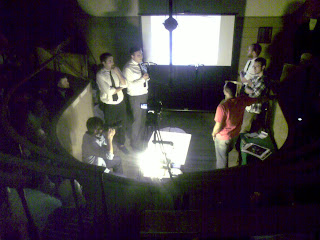 Interesting event at the Old Operating Theatre, curated by Bad Idea a group of young journalists. They were discussing the idea of Future Human or Transhuman - the idea that human capacities will be improved in the future by biological or digital means, and exploring its consequences. We had to turn people away and it was very successful with some interesting discussion. Next day I gave a talk to 49 10 - 15 year old Liverpudlian girls - quite interesting that they all accept medical care is a human right. Later I gave an after dinner speech to an American Elderhostel group using these ideas and my experience of the NHS to give them a British perspective for their debate on Obama's health reforms. It makes me aware what a battle we have in front of us to keep health care as a human right - because as technologies evolve they are going to get more expensive and the struggle to stop medical advance from becoming a preserve of the Elite is going to be difficult. Labour has sp
Post a comment
Read more

September 12, 2009
Amazingly quickly the book I have been working on all year is now on sale on Amazon although officially published on 17th Sept 2009. Price is £9.99 but is being sold at just over £5 by Amazon. It looks good (I like the little images they have added), reads better than I feared, and the fact that it deals with the legendary Kings, and early Kings as well as the ones from William the Conqueror onwards has something of a usp. It will be interesting to see a review. Divorced, Beheaded, Died...: The History of Britain's Kings and Queens in Bite-Sized Chunks: Amazon.co.uk: Kevin Flude: Books
Post a comment
Read more

White Skin evolved in the Neolithic

September 08, 2009
Research has been published suggesting white skin evolved as recently as the neolithic. Society of Antiquaries of London - Salon
Post a comment
Read more

September 08, 2009
A huge stone building incorporating standing stones and decorative stone work has been discovered on Orkney. Evidence is also accumulating that farmer was first introduced to the West of the British Isles - Wales, Scotland Ireland before reaching the South and East Orkneyjar - The Ness of Brodgar Excavations 2009
Post a comment
Read more

George III: A New Diagnosis : Recent research by medical scientists and historians suggests that George III had manic depression rather than porphyria.

September 01, 2009
George III was not suffering from porphyria as previously believed but from bi-polar syndrome and dementia says Timothy Peters, in History Today PG 4 Sept 0. History Today - George III: A New Diagnosis : Recent research by medical scientists and historians suggests that George III had manic depression rather than porphyria. Scholars will need to take a fresh look at his reign, writes Timothy Peters.
Post a comment
Read more
More posts