Showing posts from May, 2009
Show All

Archaeology in the City of London walk

May 31, 2009
Yesterday I did a walk for London Walk on the archaeology of the City - the Easter Half. Not a good title but a good walk. The route was: Tower of London, Cooper's Row Wall Crutched Friars Rangoon Street Fenchurch St Lime St Lime St Passage Whittington Avenue Leadenhall Street Gracechurch Street St Peter Church St Michaels Church Lombard Street East Cheap fish Street Hill Pudding Lane I found various things out I had not realised - Customs House excavation were in the lot to the East of the Customs House. I found the site of the ankle-breaker ditches in Northumberland St and Fenchurch St. I worked out exactly where the edges of the Forums were and how the Churches fit onto the site. I found Plantation House - which I have read about but never quite pinned down - although exactly where the Boudicca compound was I'm not so sure. Great Walk - about 20 people and the alleyways around St Peters are really quite lovely - had they been in any other 2000 year old Capital City th
Post a comment
Read more

Copyright of images of works of art out of copyright

May 23, 2009
The copyright situation on wikipedia is quite interesting. They use images from artists represented in National Museums and Galleries and they claim them as public domain on the basis that the artist has been dead for over 70 years. I'm guessing the Galleries would probably counter claim they are copyrighting not the original painting, but the photograph of it. The photographer is still alive and therefore copyright is valid. But these images are still up on wikipedia. Is this because they turning a blind eye? Or is it that they accept wikipedia's claim that copyright of a faithful reproduction of the original 2d image is not valid. This is the page that explains it http://commons.wikimedia.org/wiki/Commons:When_to_use_the_PD-Art_tag Of course some of the images on wikipedia use reproductions which were made long enough ago to be out of copyright. However, reading on - reusing these images in the UK is risky as our courts will probably accept that copyright of a copy
Post a comment
Read more

Great Success of Surgery by gaslight at the Old Operating Theatre

May 17, 2009
We had an amazing night on the Museum at night evening. Here is a review on Culture24 Surgery by gaslight at the Old Operating Theatre: Culture24 on the road for Museums at Night | Culture24
Post a comment
Read more

May 16, 2009
This application allows your twitters to be exported to Facebook status and vice versa! Makes life simplier now that I have been forced by work to join twitter. Next is to discover how to integrate myspace and then will get the Museum set up accordingly. Facebook | Twitter
Post a comment
Read more

May 14, 2009
Here is a free web app which will check accessibility of your site: Go to wave
Post a comment
Read more

Rawiri Paratene - the Friar and the Herb Garret

May 13, 2009
We got a nice mention in the Globe by an actor who is performing as the Friar in Romeo and Juliet: 'I was also able to follow up an appointment with a herb-expert too. I went to the operating museum in London where they have herb gardens that would have been used in medicine, which was a huge help! I met this woman who was a herbal expert; I was at the stage of wanting to get some information about what it is that I give to Juliet, what this amazing drug is, and she was able to steer me towards suitable books. So I feel very happy about that.' He is referring to the Museum's Curator, Karen Howell GlobeLink :: Rawiri Paratene
Post a comment
Read more

May 05, 2009
A very beautiful and very rare millefiori dish has been excavated in a East London cemetary site in Prescot Street. Rare Roman glass bowl found 1,700 years after it's buried next to merchant in East London | Mail Online
Post a comment
Read more

May 04, 2009
Someone sent me a email from friends reunited today so I went to look at it - someone I was at the same primary school with but I have no recollection. But what was strange was the fact that Friend Reunited gave me a list of friends I might know and I have no idea how they made the guess as the person has no institutions in common with me and I did not think that many friends so how did they spot a possible friend? I guess it must be something to do with mutual friends but as I don't have any friends listed on Friends reunited I can only guess that the way they do it is to compare the two lists of people at various institutions and if several overlap off the person as a possible friend. Quite big brotherish
Post a comment
Read more 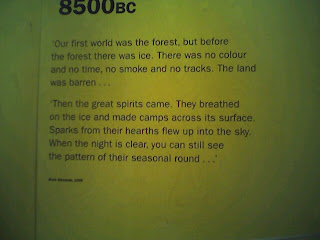 Museums - facts, fakes and fiction Julian Spalding has a few interesting things to say along the lines that museums pedal authenticity but looking into the history of many museum objects shows that they are on a continuum from - fact to fake Julian Spalding 'The Poetic Museum: Reviving Historic Collections ' Prestel Publishing Ltd 2002 Take for example the Cutty Sark , it seems it sustains a major fire and still somehow remains genuine (because I believe it has a steel frame which is intact, while the timber work was and is often replaced). In the case of the Old Operating Theatre Museum, the Operating Theatre's shell is original, the standings are replicas, and the furniture is genuine but from other hospitals and are in a way set dressing. So the idea that museum's embody true authenticity is not as clear cut as you might think. Despite this it is something that the Museum Curator cleaves too as the foundations upon which to repel all claims that money spent
Post a comment
Read more

May 02, 2009
Radical London walk - the route was St Pauls, Cheapside, Guildhall, Smithfield, St Johns, Clerkenwell I managed to get the group round right to the end - quite an achievement and did a fair look at the London people, riot and government - not so sure gave a good introduction to the development of radical politics - maybe that is another walk?
1 comment
Read more

May 02, 2009
Myths and Legends walk from Tower Hill (for London Walks) went very well - about 20 turned up and I got a bit further - to Walbrook, but still finding it very difficult to get as far as I want to - ideally, Guildhall or St Pauls Also, I think I am making the walk far too complicated by trying to make it myths and the archaeology - really need to shorten the narrative and make it crisper. But it is very interesting and I am at last getting to grips with Vortimer the Blessed and Belenus. Very interesting research currently being done which it trying to bridge the gap between the Anglo Saxon Chronicle and the Welsh tales which suggests Alle is Ambrosius Aurelianus
Post a comment
Read more
More posts