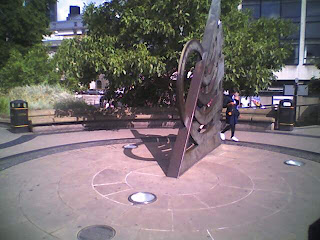 I gave a guided walk for the Bishop Challoners School BCCCS website.

It was a really excellent morning, the Girls were all really interested and contributed, not quite and studious but animated - really very impressed with them.

Route was a circular one and it really worked because there were things to investigate and tease 'facts' out of.

Outside the Wall - we see the same stretch of wall but from the outside to give an outsiders view of London. We consider the wall from the point of view of the 'barbarian invaders'.

Tower Hill Sundial– we used the sundial and time line to give orientation and use the Tower to introduce the Normans.

Tower Hill Scaffold – we use the execution to site to discuss the nature of punishment, the Peasants Revolt and the the Jacobite Revolution.

Merchant and Fishing Fleet War Memorials. - We look at the poignant list of people drowned in defense of the

uk as listed by ships name.

All Hallows Church - We do a bit of Church Archaeology to decide which bits of the Church where built before and after the Great Fire and the Blitz. (note it is possible to get into the Church to see the Roman and Saxon Remains - a fee will be charged by the Church)

Riverside Walk - We walk along the River passed the Customers House and Old Billingsgate Fish Market. We look County Hall, HMS Belfast, London's Larder and London Bridge. We discuss drowning in the Thames, Pollution, Frost Fairs and the British Empire.

St Magnus Church - We stand on the site of the famous Old London Bridge.

Monument - We discuss the destruction of the Great Fire. (note a small fee allows the pupils to walk up the monument.

Pudding Lane – We discuss the start of the Great Fire and Who Started it!