The image below is one that has intriqued me for a long time.  Every since I worked at the V&A and started giving Guided tours I have looked at this and wondered who they all are.

Henry Cole, the first Director is the third person from the left.  This article identifies others as Francis Fowke and Godfrey Sykes. I imagine others include Gamble and Poynter.  The fifth person is thought to be Kiplings Father.

Salon IFA wrote this about him. 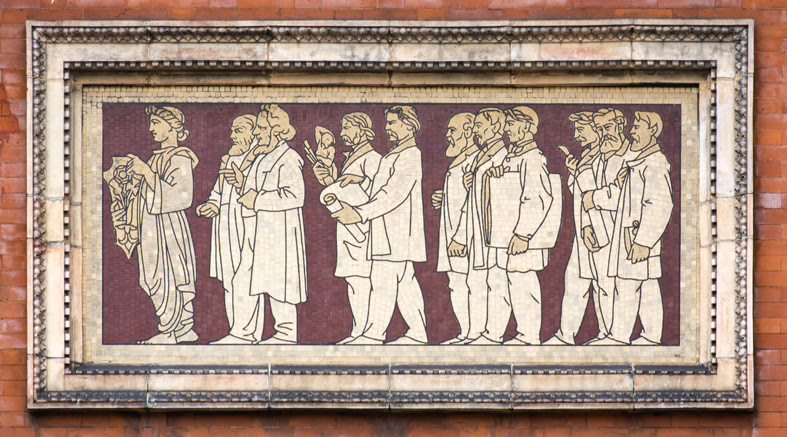 John Lockwood Kipling (1837–1911), writes Julius Bryant FSA introducing a weighty book which accompanies a new exhibition, ‘is part of the fabric of the Victoria and Albert Museum.’ Artist, writer, museum director, teacher, conservationist and influential Arts and Crafts figure, Lockwood has been the subject of a three-year international research project led by V&A Senior Research Fellow Sandra Kemp. Bryant, who is Keeper of Word and Image at the V&A, and Susan Weber FSA, founder and Director of the Bard Graduate Center, New York, have curated the free exhibition, Lockwood Kipling: Arts and Crafts in the Punjab and London (at the V&A 14 January – 2 April). John Lockwood Kipling: Arts & Crafts in the Punjab and London, edited by Bryant and Weber, is published by Yale University Press. 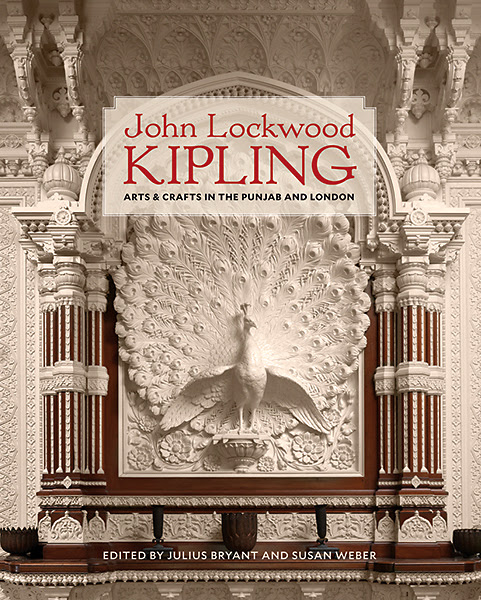 The book offers a timely intellectual feast of analysis, information and illustration. Kipling began his career at the South Kensington Museum as an architectural sculptor in 1861 (he trained in the Staffordshire potteries, Tristram Hunt will have noted). This was just four years after the museum first opened, and nearly 40 years before it was renamed the Victoria and Albert Museum. Kipling now parades in a terracotta panel on what was the museum’s original entrance front (1868, at top), featuring ten South Kensington worthies: he is, I think, the fifth gentleman from the front, preceded by the museum’s first director, Henry Cole, its architect Francis Fowke, and Godfrey Sykes, who designed the tiles (the book is not clear, can anyone name all ten?).

In 1865 Kipling and his pregnant wife, Alice (née MacDonald), left for Mumbai, then known as Bombay (their son Rudyard was born there). He had a three-year contract to teach architectural sculpture at the Sir Jamsetjee Jeejeebhoy School of Art. He stayed there for a decade, and then spent 18 years as Principal of the Mayo School of Industrial Arts in Lahore (today Pakistan’s National College of Arts) and Curator of the Lahore Museum. The book and the exhibition, through Kipling and his varied talents and interests, bring together a mass of new material to inform inquiry and debate into the creative relationships between imperial Britain and India. Kipling recorded, preserved and inspired in India and shipped to Britain some lovely and precious things; his own art is competent, and valuable especially, perhaps, as documentary illustration. 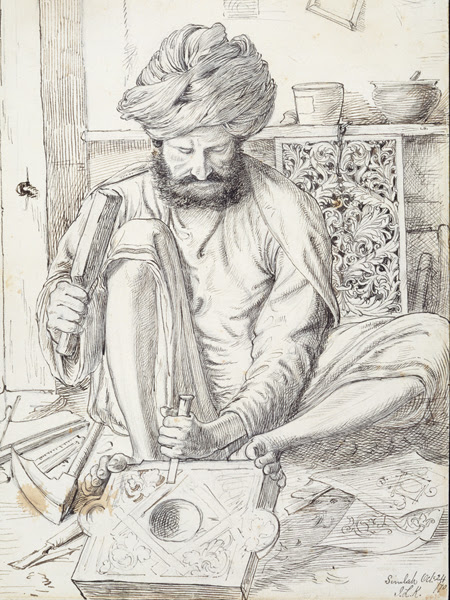 ‘Even the most well-meaning denizens of British India,’ writes Jan Dalley in the Financial Times, ‘are hard put to escape the taint of empire. The continuing controversy about Rudyard Kipling – was he an apostle of the Raj, or its critic, or simply a realist about its complexities? – applies equally to his father. But now, on his home territory, this exhibition should go some way to re-establishing the name of John Lockwood Kipling.’

The drawing (detail) shows a woodcarver, from a collection depicting craftsmen of the Indian north-west provinces, by Lockwood Kipling (1870).

• Another India: Explorations and Expressions of Indigenous South Asia, opens at the Museum of Archaeology and Anthropology, Cambridge, on 8 March.