I am Ashurbanipil Exhibition at the BM 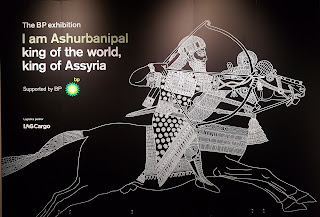 The British Museum has a host of wonderful relief carvings collected from Assyria in the 19th and 20th Century.  They are free to see, easy to get to on the ground floor, can be enjoyed without much insider knowledge, and nor is it necessary to spend long reading labels. Now the Museum has put some of them together with a whole load of objects from the store. The net result is a very satisfying exhibition which gives a pretty good background to the enjoyment of the reliefs.
The carvings are amazing, and look very good with the black backgrounds and relief lighting. 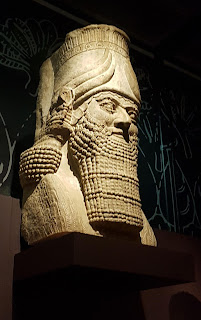 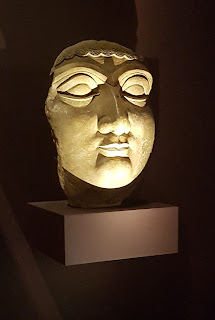 These two, are larg scale sphinx to the left and to the right the head of a diety half animal half human. 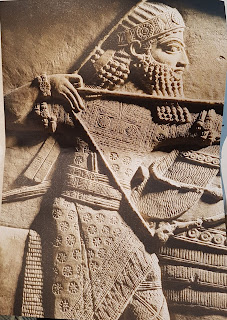 Ashurbanipil was also something of a star student, and is, in one notable relief, depicted with a pen in his waistband.  (picture to the right).  Archaeologists have found shelves and hundreds of clay tablets showing that the King had a large library.    The displays suggest that the library was mostly to help the king with spells, and prophecies which, is a little disappointing.  It would be interesting, though, to have more details of the library. The King did not seem to believe in humility as the inscriptions keep telling us how good he is at learning, prophecy, hunting lions, shooting arrows etc. 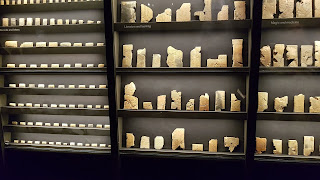 This is a display of the clay cuneiform tablets. And a close up below. 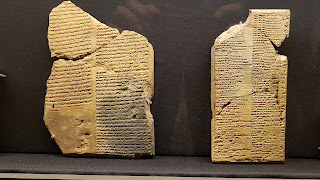 The picture below shows that they also used wax tablets like the Romans. 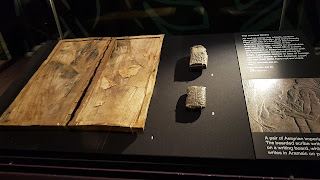 And this one shows the origins of double entry book keeping. These people shown below are keeping a list of booty collected in war. The accountants are always shown in pairs, one bearded and the other clean-shaven.  The panels suggests one writes on a board and the other on parchment and in different languages.  I wonder if the clean shaven ones are Eunuchs? 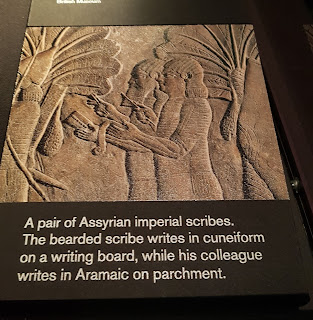 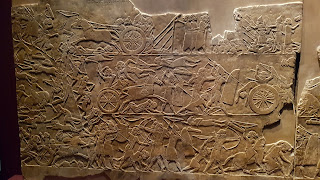