Ancient Pictures as inspiration for Storyboarding.

October 17, 2017
As part of the M.A for Narrative Environments at Central St Martins we use storyboards as a technique for developing narrative projects.  Tutors on the course collected examples.  I looked at inspiration from ancient sources. 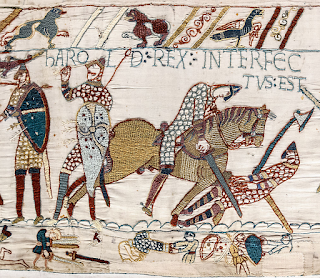 The tapestry moves through time and space with a clear narrative. Different narrative layers are used. Simple conventions make it easier to read – the English for example have moustaches while the Normans have pudding basin hairstyles. Text is limited for example to crucial identification of leading characters. Places are not spelt out though can be identified by those who know by context and form.  The narrative structure is  linear and has beautiful clarity. The top and bottom strips allow additional information often decorative but often individual stories or symbols.
The following shows a scrolling video of the Tapestry:
https://www.youtube.com/watch?v=08zVsxjVEJY


Charles Duke of Orleans in the Tower 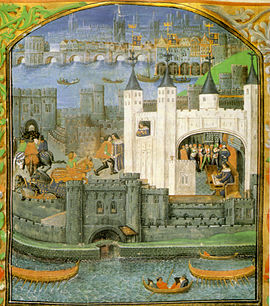 This is a single image but time is shown passing. This is indicated by the simple method of showing Charles in distinctive clothes so you can recognise the multiple occurrences of this person as time passes..
The duke is shown in prison in the Tower writing – is he writing his poetry (this is the frontispiece of his book of poetry) or is he writing a letter to his relatives saying 'Oi! I've been here 20 years while you fail to raise my ransom!' (he was imprisoned for 20 years after being taken prisoner at the Battle of Agincourt while his family raised the enormous ransom).
He is shown looking out of the window for the ransom money to arrive; he is shown greeting the money; He is shown riding out of the Tower to freedom; he is shown boating to freedom to a boat to take him home
https://en.wikipedia.org/wiki/Charles,_Duke_of_Orl%C3%A9ans#/media/File:Towrlndn.JPG 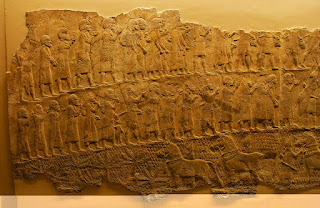 This is an alabaster relief which provides an extended portrait of a siege of a town in Palestine by King Senacherib of Assyria.   It is like a long camera pan across the battlefield but time passes as you move from left to right seamlessly but you also move geographically from the West to the East. So it doesn't have frames but in a single image the story of the siege is told seamlessly,.
Here is a youtube illustration of the siege relief
https://www.youtube.com/watch?v=CcLwoa19kLw

Trajan's Column shows a vast scrolling narrative of the invasion of Dacia by Trajan. It is full of detail and is used by Archaeologists to understand Roman military campaigns and methods of colonisation. The relief are quite subtle often using different viewpoints to elucidate information and can be used as a model of using images to tell a story.
But what makes it interesting is that it would have been very difficult to read despite the fact that the Romans built 2 libraries to the side of it with viewing platforms. Trajan is depicted 58 times (in yellow above); his ashes were buried in a vault on the ground level, and a statue of him on top. So the public could never see all the detail and so the interpretation was that the primary purpose was to glorify the Emperor – the detail was as much to impress as to be read by the public. 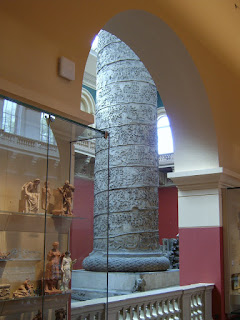 You can see a plaster cast in the Cast Courts of the V&A
This is an interesting article on the Column. http://www.nationalgeographic.com/trajan-column/article.html and you might enjoy this short stop motion animation documentary about building the Column
Building the column


By way of contrast, here is an interesting collection of story boards of iconic film
http://flavorwire.com/349534/awesome-storyboards-from-15-of-your-favorite-films