November 09, 2008
Here, I continue the narrative of the Guided walk around the On Purpose Exhibition at the Arnolfini, which paradoxically, took place at the 'Wouldn't it be nice' exhibition at the Embankment Galleries.

The next piece on my Arnolfini tour was Alex Rich's 'Things to Say. Rich used a series of workshops with children and explored the use of simple shapes to make up letters. At the Arnolfini the first words by Rich on the wall of the Exhibition spelt out 'Suki Yaki'. 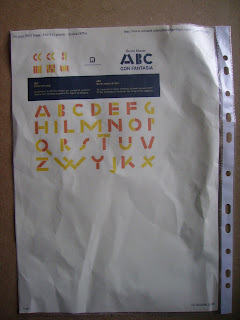 My insight into Rich's work was helped by an examination of 'Book Circle' the last piece in the Arnolfini exhibition, only 2 authors could be identified from this piece and one was Bruno Munari. I looked him up and found that the font Rich was using with the children was identical to Munari's font see above. Munari believed that progress is simplification and was trying to find the fewest shapes that were needed to make a fond. He thought only one font should be necessary for all purposes and he called this font 'Essential'.

So I found the first piece of writing on the wall inside the 'Wouldn't it be nice' exhibition which was a simple information panel in a simple elegant black font on a white background, and talked about this piece of text as if it were Rich's work, pointing out how each letter could be made up from simple shapes, and reflecting up on the obsession that some designers have for fonts. 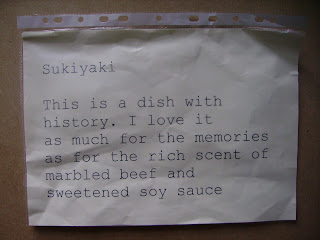 Rich's first piece in Bristol spelt out 'Suki Yaki' so I read a piece on Suki Yaki. I also showed a book which I happen to have by Ann & Paul Rand who were influenced by Munari called Little I and which illustrates the idea of simplification. 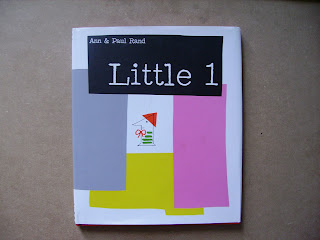 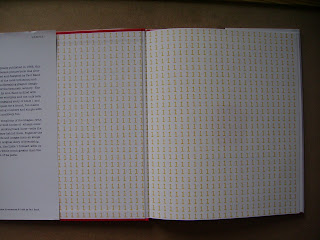 My next intervention was based on Peter Jensen's 'Garments for Stewards'. The idea, I gather, was for the Stewards at the Arnolfini to wear uniforms designed by Peter Jensen and Ann-Sofie Back. But the Stewards rebelled. The next design at the Wouldn't it be nice exhibition was a set of about 9 costumes. I therefore described these as if they were the uniforms for the Stewards and I brought into the conversation one of the stewards asking him which costume he was going to wear. The idea, similar to that of the adverts in the book shop, was to extend the exhibition beyond the normal confines of an exhibition, in this case into the bookshop and onto the backs of the Stewards. 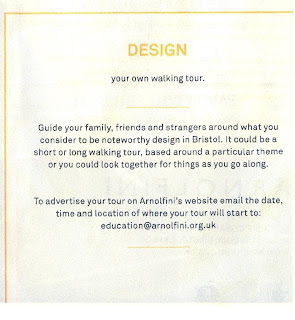 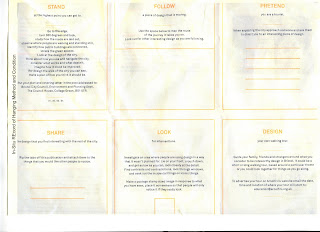 The next piece was Conway and Young's exploration of Design in Bristol, this 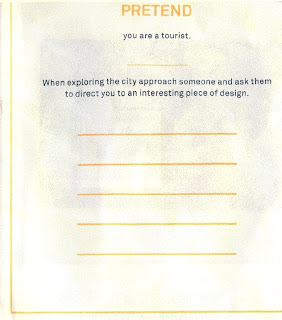 was the production of a'catalogue' produced after school children explored Bristol for Design. I cut up the booklet and intended to do various of the activities that Conway and Young used with the children. However, the only twoI managed to do was one which exhorted us to design a Guided walk, and the other which suggested asking a passer by for an interesting piece of design - this lead us to our next piece. The other one I intended to do was the one illustrated here which involves lying down on the floor.

The next piece to do was Will Holder's Common Knowledge which at the Arnolfini consists of the Artist's library. Holder was on holiday during the exhibition and the Library represented him He is a artist, designer, writer, editor who likes to investigate the gap between language and object. To extend the interest of the piece, which represented, all his formative knowledge, the visitors can borrow the books provided they promise to post them back again. Luckily, the next piece in the Wouldn't it be Nice exhibition featured books. This was Jurgen Bey's 'Modelworld Maquette; 2007, which featured models and black and white books. I reported that the piece represented all the knowledge of the artists, who was so severe in his minimalism that he only ever read black and white covered books. It meand that we as the audience could read everything he had ever read and would therefore be able, for the first time in design history, be able to predict everything he would ever produce.

Next up was Abake's Limb Typology. The essense of this piece is that people use their arms to create letter forms. Abake had made a poster of the resulting japanese letter forms and insisted on charging £1 for those who could read Japanese but £10 for those unable to understand what they were buying. In order to depict this piece in the Embankment Gallery, I asked the audience to split into groups and to create their own word using only their own bodies. This they did and they came up with OK, Like and I cannot remember the third word. I had prepared a piece which in the event I did not use but they were supposed to spell out

'its all about the font stupid' 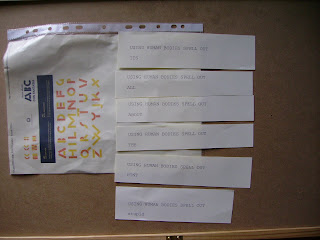