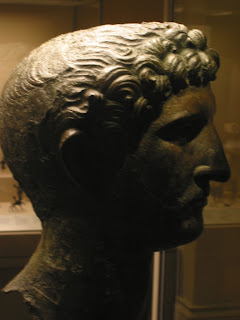 Went to see the Hadrian Exhibition at the British Museum - just before it closes. It was quite enjoyable in a surprisingly low key way - the word Blockbuster is entirely wrong for it. It was almost domestic in its interest. It did not provide much of an introduction to the Roman Empire or the problems of governing it but it did provide a biography of Hadrian starting with a memorial to his wet nurse and with collections of statues of his adoptive parents, wife, successors and his boyfriend Antinous. There was a little bit about the Pantheon, a model of his villa in Tivoli, and a strange series of finds from Caves from jewish refugees, which I assume were included to show the dark side of Roman rule, but they just made it clear how much else had been left out.

Very few insights into the Romans except the portraits and the story of Antinous.

I took my daughter who is studying Classical Civilisation and somewhat shocked to find she had to pay £12 to get in - surely children studying the subject should get in free?

The narrative struture was based on a biography and started at the beginning of his life to his death.

Design was black, some use of not very striking images projected on walls and use of visions of the Dome to remind us of the Pantheon.

I really am still very upset that they have closed the Reading room to the public for years for these two exhibitions.